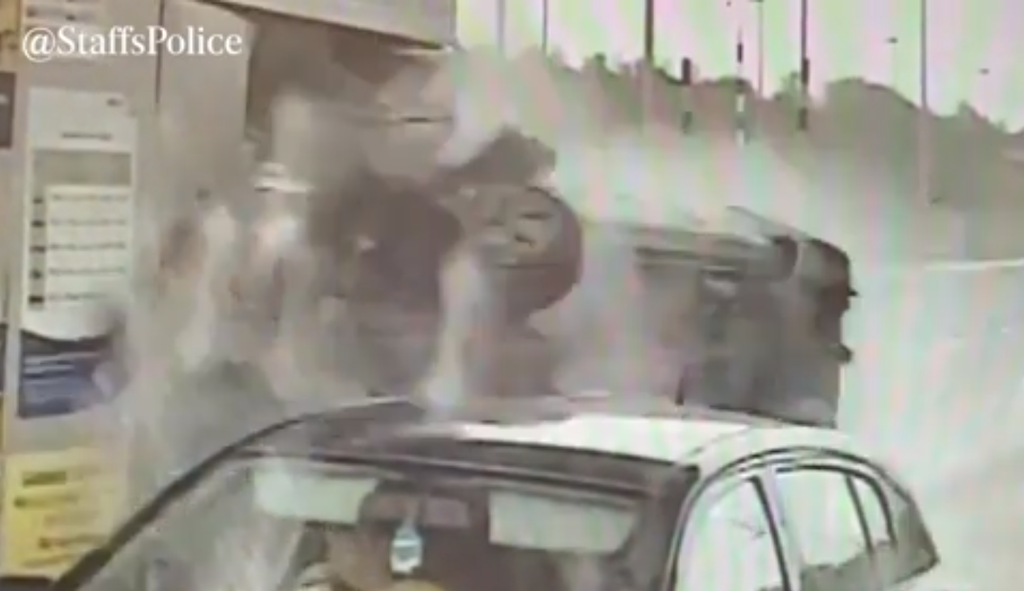 he shocking moment a drug driver flips their car, smashes into another vehicle and destroys a toll booth has been caught on camera.

The toll booth operator, a woman, was crushed in the collision suffering minor injuries for which she is continuing to receive treatment.

Three people narrowly escaped serious injury after the driver lost control of his car in Norton Canes, Staffordshire on the M6 on 25 August last year.

Police said it was a “miracle” no one was seriously hurt in the crash.

Swab samples taken from the male driver showed he had several controlled drugs in his system at the time of the smash.

The drug-driver, now 28, who cannot currently be named for legal reasons, was later arrested and charged with dangerous driving.

The man was later convicted of the offence and sentenced to 14 months imprisonment, suspended for 18 months.

He was also disqualified from driving for three years, ordered to take an extended re-test and told to carry out a number of hours’ community service.

Inspector Sion Hathaway, of the force’s central motorway police group released the footage as a warning to drug drivers.

He said: “This was a terrifying incident for the individuals caught in the consequences of this reckless driver’s decision to take drugs.

“It is a miracle that no one was seriously injured.

“I hope that this footage presents a real warning to anyone who is thinking about getting behind the wheel in an intoxicated state. You not only risk your own life, but the lives of others.”

What the papers say – October 19

NFTs not annoying enough? Now they come with wallet-emptying malware •...

Criminals use fake AI voice to swindle UAE bank out of...

Client-side content scanning as an unworkable, insecure disaster for democracy •...

What the papers say – October 19